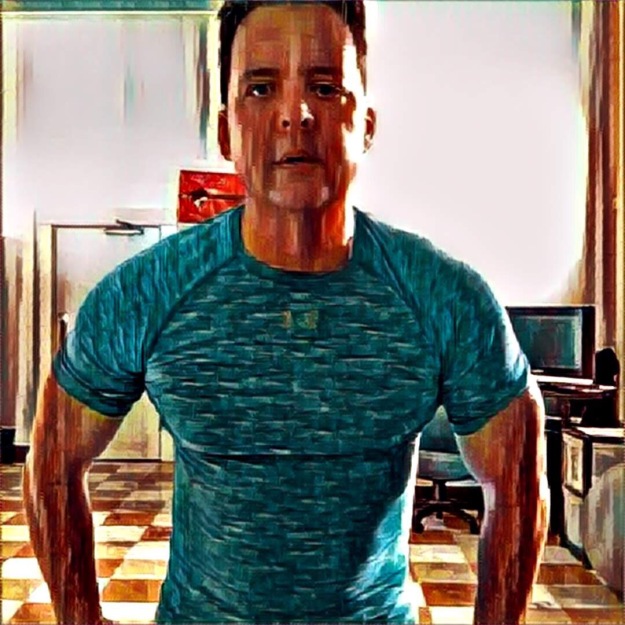 Most people know I’m always eating a Paleo diet, but I was not going to strict for a while, flexing my eating a bit. About a month ago I started using a FitBit again and decided to go strict Paleo again. On the day I started strict Paleo i weighed in at 192.4 pounds with a body fat of 28.6%. Today I weighed in at 182.6, losing 9.8 pounds. Body fat down to 25.6%, equaling 3% down in one month. Thanks to all my FitBit friends, your competitive spirit is pushing me to get to my weight/body fat goal.😊Diet is the most important for weigh loss, not to mention health, then exercise second.👈

I’m going to San Diego comic con this year! Yeaaa! See you there 😊

If you people ever visit the Big Island of Hawaii, and want to see sharks in the field, go to the spencer beach park area in Kawaihae, and to the right side of the beach is Pu`ukoholā Heiau. In the bay below the Heiau there are always a bunch of sharks cutting the surface. One of the few places you can see this sort of thing.They are mostly black tip sharks, but the bay has hammerhead sharks and sometimes the dreaded tiger sharks. The strange thing is Spencers beach, a popular swimming area, is only about 400 yards to the south, and the sharks don’t go that way.

Here’s a link for a video I made of me trying to get home after Hurricane Iselle hit the Big Island of Hawaii on August 7th, 2014. I was trying to get home to check in my wife and kids, who were trapped on our street due to downed trees and powerlines…

Inflammation is the body’s/persons response to a problem. When your body thinks there’s a constant problem, it lives in a chronic state of inflammation. This steady, low level inflammatory state underlies all chronic disease and suppressed immunity. Essentially, it’s at the root cause of just about every disease in imaginable. So what causes inflammation in the body? One of the main things is high sugar/carbohydrate consumption. Eating high sugar/carbs causes a massive insulin spike. This results in a heavy sugar crash. The body perceives an emergency and causes a cortisol response. This is alarming to the body. This causes inflammation in the body. Inflammation then triggers disease. The daily cycle of this process takes a toll of the body. You age faster. Hold on to fat. Feel tired and sluggish. Get sick. Go low sugar/carbs unless you are training hard. Ok?

Why I don’t eat Bread.

1. All types wheat (including whole wheat) have a high glycemic index (GI), which can increase your glycemic load and create Type 2 diabetes over time. Amylopectin A is a complex carbohydrate that is broken down quickly in the mouth and can raise blood sugar more than 6 teaspoons of sugar. Eating just two slices of whole wheat bread will raise blood sugar more than a Snickers bar.

2. Amylopectin A is a starch in wheat that triggers an increase of dangerous small LDL particle formation which is low density cholesterol that can get clog blood vessels. A diet high in carbohydrates such as bread will create too much small dense LDL.

3.Wheat has gliadin which is an addictive opiates that stimulates our appetite throughout the day and impairs our ability to say no to high carbohydrate foods. These exorphins cause food obsession and unbearable hunger.

4.Genetic manipulations were used in the 1970′s to create a high-yield, short and stocky strain of wheat which creates an agricultural Frankengrain. These changes to the plant altered the amino acid profile, meaning the wheat of today has totally different effects on our delicate digestive systems than the grains of early agricultural times.

6.Amylopectin A is a starch in wheat that sets off a vicious cycle of deep abdominal belly fat and hormone havok. Extra belly fat makes inflammatory chemicals that promote estrogen dominance which increases cancer risk in men and women.

7.Wheat is hidden in most boxed foods to stimulate appetite to keep us coming back for more.

9.Seemingly nutritious wheat germ and sprouted wheat has lectins, which are poisons that keep humans from digesting the seed. These lectins cause significant damages and irritation in the small intestine over time.

10.Wheat germ agglutinin found in the wheat kernels unlocks the tight barriers of the small intestine letting undigested food into the bloodstream increasing the risk for autoimmune conditions such as MS, Lupus, Chrohn’s, and Hashimoto’s thyroid disease.

11.Fiber can be abundantly and easily obtained from fruits, vegetables and nuts. Wheat and other grains can cause constipation, the opposite effect most people are seeking from fiber.

12.Wheat consumption can interfere with the production of neurotransmitters such as serotonin in the small intestine creating depression, rage and anxiety in many people.

Our current Health practices of this modern day era is heavily influenced and constantly changing in response to politics, lobbying, and the media. Theses 3 entities have an agenda that follow trends based on monetary interests that benefit themselves. As a result, their recommendations are not based on science. They recommend diets based on monetary profits, whether it benefits your health or not. When you look at all the wonderful results to people concerning health improvement regarding the Paleo diet, you can see why main stream medicine does not support it at this time. How will they profit from having healthy people? After ALL my medical issues disappeared after about 6 months on the Paleo diet, my doctor asked what I was doing that improved my health. I told him about the Paleo Diet. “That’s pseudo science. There is no proof. It must be something else”. Know it all, closed minded people suck, and get people killed.